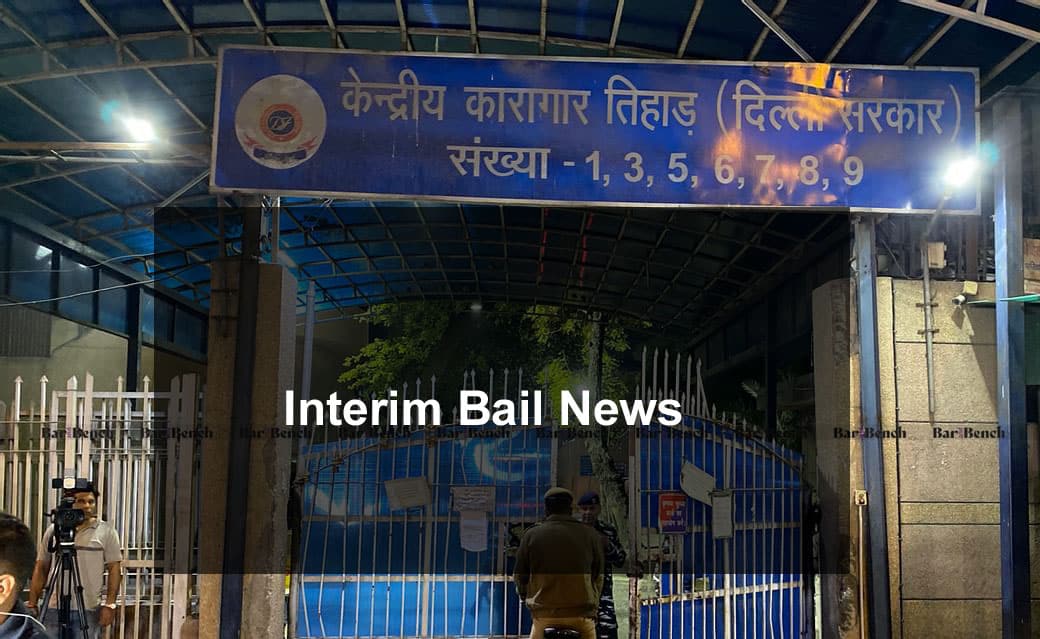 The Delhi High Powered Committee is of the opinion to Extend Interim Bail/Paroles for 5123 under trial prisoners/Convicts.

The Delhi High Powered Committee held a meeting on Thursday 14/01/2021 with the following officers upon the extension of Interim Bails/Paroles and other matters:

The meeting commenced on the following Items:

ITEM NO.1:- FOLLOW UP OF RESOLUTION ADOPTED EARLIER WITH RESPECT TO PREVENTION, SCREENING, IDENTIFICATION & TREATMENT OF PRISONERS AND JAIL STAFF

ITEM NO.2:- STEPS TAKEN TOWARDS SCREENING OF JAIL STAFF, PARA-MILITARY AND MEDICAL STAFF

ITEM NO.3:- TAKING STOCK OF THE EFFECT OF CRITERION EARLIER ADOPTED TOWARDS DECONGESTION OF JAILHIgh Powered Co

ITEM NO.4:- FEEDBACK REGARDING EXTENSION OF INTERIM BAIL GRANTED TO UTPs IN TERMS OF RESOLUTION ADOPTED IN THE MEETING DATED 30.08.2020

ITEM NO.5:- FEEDBACK REGARDING EXTENSION OF “EMERGENCY PAROLE” GRANTED TO THE CONVICTS BY GOVT. OF N.C.T. OF DELHI

At the outset, Sh. Sandeep Goel, D.G. (Prisons) apprised the bench in detail with the efforts of officers and other jail officials who are doing their best to keep the jails COVID free by complying with the guidelines, instructions, and resolutions passed by the Committee. He further informed that by scrupulously complying with the resolutions adopted earlier they have been successful in keeping a check on the increase of cases of COVID-19, he said that the previous measures taken by them have been successful in bringing down the number of active cases of COVID–19 (Novel Corona Virus) inside the jail premises. D.G. (Prisons) informed the committee through his letter No.PS/ DG(P)/2020/17-22 dated 04.01.2021 that, as of 04.01.2021, the cumulative figure of COVID -19 Positive cases in Delhi Prisons is as under and why the Interim Bail Extension due to COVID 19 is required:

However, in the meeting, he brought it to the knowledge of the Committee that one inmate of Jail No.13, Mandoli before being produced in court for the physical hearing, was tested for COVID-19 and found positive. He further submitted that “contact tracing” was done and 26 other inmates of his barrack were also tested through “rapid antigen test”. During this test, one more inmate was found COVID-19 positive. Both these inmates have been separately quarantined. Honorable Chairperson directed D.G. (Prisons) to get RTPCR tests of these inmates conducted at the earliest and till then they are not allowed to mingle with other inmates of the jail. DG (Prisons) has assured to do the needful.

D.G. (Prisons) also informed the Committee that in terms of the resolution adopted in previous meetings, as well as in subsequent meetings, Jail Administration is taking extra precautions with respect to inmates who are more than 55 years of age, so that they are not ‘immuno-compromised’. D.G. (Prisons) has further assured the Committee that they shall continue doing the needful.

(c) Other persons entering the Jail premises for delivery of ration and other essential items.

D.G. (Prisons) had informed that in view of resolutions passed by this Committee in the last meeting, they are carrying out ‘Rapid Tests’ of jail staff, paramilitary staff, and others, as per ICMR guidelines. He further informed that ‘thermal screening’ of the jail staff is also being conducted before letting them enter the jail premises.

He informed that jail staff is cautioned to wear masks and to maintain social distance while interacting with each other as well as with inmates. They are also cautioned to wear Personal Protective Equipment Kit as per need. DG (Prisons) has further informed that as suggested by the Chair, the jail staff is taking two-layer protection, i.e. in addition to using face Mask they have also been provided with visors, which they are using regularly.

He also informed that till 04.01.2021, a total number of 290 Jail Staff were found COVID-19 Positive, out of which 288 have already recovered. He also apprised the Chair that at present there are only 02 active cases of jail staff, who are home quarantined. D.G. (Prisons) further informed that as and when any jail staff is tested COVID-19 Positive, he/she is relieved from their respective duties and is asked to remain home quarantined. D.G.(Prisons) further informed that contact tracing is being done in such cases and all those who had come in contact with these Jail Staff, are being medically screened and tested.

D.G. (Prisons) further informed that they have minimized the contact of jail staff, paramilitary staff, and others with the inmates, so as to prevent the spread of COVID-19 inside the jail premises.

D.G. (Prisons) has submitted that besides the above, they have adopted a multi-pronged approach to tackle the threat of COVID-19 (Novel Corona Virus), i.e.:

Besides the number of inmates released pursuant to criteria adopted earlier, Committee has further perused the number of UTPs released on Personal Bond, on the basis of orders passed by Hon’ble High Court in W.P. (Criminal) No.779/2020. The figures are also mentioned in the letter of D.G. Prisons, bearing No.PS/ DG(P)/2021/2072-73 dated 09.01.2021. The same was perused by the Committee which is as under:-

TOTAL UTPs/ CONVICTS RELEASED ON INTERIM BAIL/PAROLE/ REMISSION OF SENTENCE TILL 09.01.2021 as part of a decongestion effort under the aegis of Hon’ble HPC – 5123

Members of the Committee have considered that as on date against this capacity, there already are 16396 inmates. Even if the additional accommodation of 2000 inmates in the newly created ‘temporary jail’ is taken into consideration, it would be highly inconvenient for the jail authorities to accommodate UTPs/ convicts released on ‘interim bail/emergency parole’ under the criteria laid down by this Committee, if they are made to surrender simultaneously.

Members of the Committee are of the opinion that it would be appropriate to prevent any chaos or inconvenience to the jail authorities, if the UTPs granted ‘interim bail’ on the basis of criteria laid down by this Committee are asked to surrender from February 2021. As by that time the quarantined/Isolation period of convicts surrendering after the expiry of their emergency parole, would be over. Taking into account the cumulative effect of all these relevant factors, i.e. :

(c) No. of UTPs/convicts who are likely to surrender after the expiry of interim bail/emergency parole. (d) Period of 14 days for keeping them in Isolation Cells before sending them to regular jail.

Members of the Committee are of the opinion that interim bail granted to 3499 UTPs under HPC criteria needs to be extended for a further period of 30 days & recommended accordingly. Member Secretary, DSLSA has further apprised the Committee that Special Bench so constituted by Hon’ble the Chief Justice, which had earlier extended interim bail vide order dated 02.12.2020 has listed the said matter on 18.01.2021.

The Committee is of the opinion that in this regard, a judicial order would be required from the Hon’ble High Court of Delhi and recommends accordingly. It is clarified that these 3499 UTPs for whom the recommendation is being made, are the ones who fall in any one of the criteria laid down by this Committee in its previous meetings, irrespective of the fact as to whether the application for interim bail on their behalf, was filed by any private counsel or by panel lawyer of DSLSA.

Member Secretary, DSLSA is directed to place these recommendations of the Committee by forwarding a copy of these minutes to Ld. Registrar General High Court of Delhi, for necessary action in this regard. In the event of the passing of any such order by Hon’ble High Court of Delhi on the basis of recommendations of this Committee, it is made clear that jail administration shall inform such UTPs about the extension of their “interim bail” for a further period of 30 days from the date, the earlier period of interim bail is expiring, telephonically.

D.G. (Prisons) assures that jail administration shall do the needful and shall inform all such UTPs about the exact date of their surrender. It is though apparent but is still being clarified that interim bail was granted to UTPs under the criteria laid down by this Committee by different Courts on different dates for a period of 45 days.

Considering that these 3499 UTPs were granted interim bail on different dates, thus their interim bail shall expire in a phased manner, therefore, no separate dates are required to be given for their surrender. Needless to add that if the situation of COVID-19 in Delhi remains the same or reveals a declining trend, no further extension of interim bail shall be made by this Committee on the aspect of COVID-19.

All such UTPs are at liberty to move their respective Courts seeking regular bail through their private counsel or by panel lawyer of DSLSA, as the case may be, and all such Courts may consider the bail application so filed on merits, de hors the criteria laid down by this Committee.